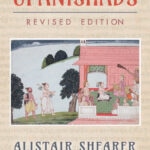 The Upanishads are key texts of the ageless wisdom known as the Perennial Philosophy. This lucid new translation presents selections from the eleven traditionally considered the most important: the Mandukya, Kena, Chandogya, Isha, Brihadäranyala, Taittiriya, Mundaka, Kaushitaki, Maitri, Katha and Shvetäshvatara. Each selection is preceded by incisive introduction that explains simply and clearly Sanskrit terms and yogic concepts that might otherwise be obscure. What emerges is that these writings, composed in the forest retreats of India some twenty-hive centuries ago, address still vital questions about the nature and destiny of humankind and the consequences of disregarding the natural order and the greater whole.

Alistair Shearer is a cultural historian specialising in the art and architecture of the Indian subcontinent, a former lecturer at The School of Oriental and African Studies at London University and a teacher of meditation and the psychology of yoga. His books have been translated into all major European languages, as well as Japanese and Hebrew, and his translation of the Yoga Sutras has remained in print for almost forty years Alistair is co-creator of an award winning retreat hotel (www.neeleshwarhermitage.com) on the coast of Malabar, in Kerala.

Available from all good bookstores and from Amazon. Spread the word on social media!