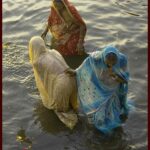 Whereby the waters flow, that is a form of the Truth’ Rig Veda.

Water is the mother of civilisation, as fire is its father. Early cultures naturally clustered on the banks of the great arterial waterways – Indus, Nile,Yangtze, Ganges and dozens of others  – using the precious substance for drinking, washing, cooking, irrigation as well as healing and ritual purposes. Thus religion fits into a natural cycle linking human and divine: from rain comes rice, from rice comes wealth, from wealth comes patronage, from patronage comes worship and from worship comes rain. But Mother Nature can withhold as well as give, or give too abundantly, and many of the sites in this book owe their existence to the painstaking engineering necessary to manage water and outwit the vagaries of drought and flood.  The ancient civilisations of Sri Lanka and above all, Cambodia, were particularly skilled in creating systems of storage and distribution that have never been bettered.

Water is life. It has always been seen as a gift of the gods by both sea-faring and landlocked Asia, a necessity that is itself divine. Many rivers are considered sacred to this day, especially in India, where their water is believed to have healing powers. The Sanskrit word for pilgrimage spot is tirtha  meaning ‘ford’, and each of the liberated saints of Jainism, perhaps India’s oldest religion, is called a tirthankara – ‘one who has crossed over’ the ocean of suffering and death. The confluence of two rivers is especially holy.

This reverence for water is found throughout Asia: in Thailand a river is called mae (‘mother’); in Bhutan streams are used to turn giant prayer wheels; the Tibetans read omens from images in their sacred lakes, while the ancient Khmers had their rivers flowing over images of the gods to empower the water and ensure the health of the crops.

‘When unleashed, the mighty waters generated the mother of all…from there was the one life-breath of the gods breathed forth’ Rig Veda.

Water is the supremely feminine element: nourishing, slow, lunar, adaptable, always able to find its own level and imbued with the invincible strength of patience – a single drop repeated often enough will cut through the hardest stone. Flowing downwards from its crystalline source, its purity becoming gradually clouded by the earth it passes through, water is a perfect analogy to the Divine radiance, increasingly obscured by its own material creation.

The almost sacramental status afforded water by traditional societies is due to an instinctual affinity we humans feel with the substance. All life originated from the sea, we spend the first nine months of our life floating in water, our bodies are ninety percent water and we live on a watery planet. This last is particularly so, of course, for those who live in tropical or semi-tropical climes; no one who has not experienced a monsoon can imagine its primal power. As a result we are deeply familiar with the laws of nature that govern water. Even today in those parts of the Orient where villagers living on or by water move home with the monsoon tide – perhaps six or seven times a year – it is possible to witness the ancient yet vital relationship our species has always enjoyed with water, in sacred, economic, dangerous and pleasurable ways.

‘May the divine waters be propitious to our worship, may they be good for our drinking: may they flow round us and be our safety and our health’ Rig Veda

It is in everyday religious ritual that this intimate relationship water is most charmingly expressed. Hindu images are lovingly lustrated with sacred water, and other watery liquids – milk, ghee, honey,coconut juice; Buddha images receive bowls of water as offerings, and the naturally adaptable flowing of water is seen as the ideal mode of behaviour for the Taoist sage. The potent combination of racial memory and everyday reality made it inevitable that water would play a central role in the earliest mythologies. In Hinduism, the Golden Egg, seed of all manifestation, emerges from the primal waters to generate cycle after cycle of creation, in Chinese myth the world rests on a giant turtle floating on the heavenly waters, while the Buddhists picture the various universes as fabulous islands rising out of the cosmic sea.