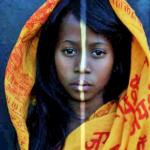 Perhaps surprisingly, the above headline does not come from a 1970’s feminist tract, but actually tells of two seven-year-old girls from a remote village in neighbouring Tamil Nadu who recently married frogs in an intriguing wedding ritual. The young brides, Vigneswari and Masiakanni, hail from the village of Pallipudupet in Villupuram district. The wedding ceremony, a highlight of the annual Pongal (harvest) festival, was conducted to prevent the outbreak of mysterious diseases in the village. As such, it forms part of a clutch of ancient Hindu kanya rituals that involve young girls as the embodiment of The Goddess and thus vehicles and symbols of fertility and the continuance of life.

The girls wore gilded wedding saris and gold jewellery and married their amphibian grooms in front of hundreds of villagers. The frogs were tied to long sticks decorated with garlands for the lavish marriage ceremonies. The subsequent celebrations had all the usual elements of a traditional marriage, including a sumptuous feast.

Sadly, there was apparently no fairy-tale ending, as neither frog transformed into a handsome prince. In fact, Vigneswari and Masiakanni weren’t even required to share a marital kiss with their husbands. Both brides simply bid their grooms farewell before returning to their normal lives. As for the frogs, after the ceremony they were gently thrown back into the temple pond, where they no doubt assumed instant celebrity status.

This custom of marrying frogs is rooted in a story of the god Shiva found in the Puranas, scriptures going back over two thousand years that are the source for countless Hindu legends, beliefs and practices. Following a quarrel with his wife Parvati, Shiva, the Lord of Transformation, turned himself into a frog and hopped off in a sulk. Goddess Parvati cried for days, and her divine misery caused disease to spread throughout the nearby villages. When the villagers asked her for help she told them to go and find the frog-Shiva and plead with him to marry a young girl; this was the only way the curse could be lifted. She herself then cleverly took the form of a delightful young girl, and when Shiva, well-known for his roving third eye, promptly agreed to marry her, both deities returned to their original divine forms and were re-united. The outbreak was cured, and all lived happily thereafter. We heartily wish the same benign fortune to Vigneswari and Masiakanni and, of course, their nameless husbands.

(It should perhaps be added that The Hermitage is a place that welcomes both humans and frogs. Both species appear to enjoy sunbathing: the former by the pool, the latter by the lotus ponds. After dark they can be observed near the garden lights, where they crouch patiently immobile, waiting to catch their supper. The frogs, that is…)